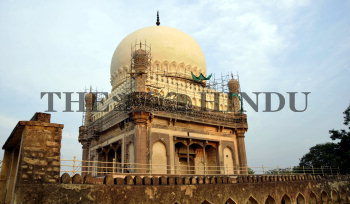 Caption : HYDERABAD, TELANGANA, 31-03-2015: Forslide show/archieves: Conservation and Restoration works taken up at Qutub Shahi Tombs by the Aga Khan Trust for Culture in Hyderabad Tuesday, March 31, 2015. A multi-disciplinary team of conservation architects, engineers, historians are involved in restoreing the 16th century monuments. Traditional building material like lime and mortar are being used to restore the graceful strucures which suffered damaged during the last two centuries. Photo: K. Ramesh Babu