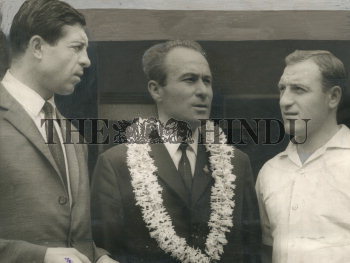 Caption : Denisienko (coach), Mr. V. I. Sazanovich, Leader and Savwstikov (captain) of the Dynamo Minsk football team from Russia, which arrived at Madras on November 29, are seen discussing the preparations made by the Madras Football Association for the team's match on Sunday, against an Indian XI at Nehru Stadium. (Pubd. in The Hindu on November 30, 1968) PHOTO: THE HINDU ARCHIVES