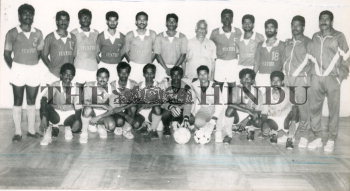 Caption : A group photograph of the Textool Sports Club team which emerged Champions in the 'A' Diviision District League football Tournament 1993, conducted by the Coimbatore District football Association. (Circa December 15, 1993) PHOTO: THE HINDU ARCHIVES