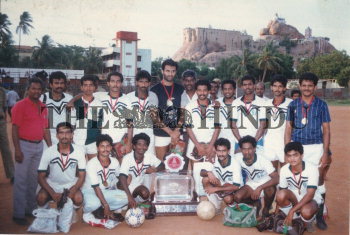 Caption : A group photograph of the Southern Railway team (Madras), winners of the X Champion Club Football Tournament, with the Universal ROLLING Trophy. Captain and goalkeeper Harish Rehman standing at the centre behind the Trophy and Arumainayagam, coach, standing extreme left. Southern Railway beat ICF 3-1 in the final held on July 14, 1991 at B.H.H.S. School grounds, Teppakulam in Trichi. PHOTO: THE HINDU ARCHIVES