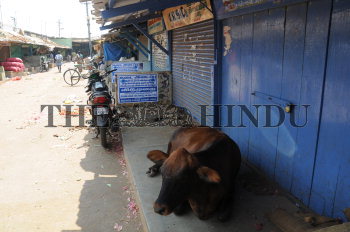 Caption : TIRUCHI, TAMIL NADU, 28/03/2015: Shops down their shutters at Gandhi Market in Tiruchi on March 28, 2015 during a bandh called by the traders to protest against Karnataka's plan to build a new dam across the Cauvery near Mekedatu. Photo: A. Muralitharan