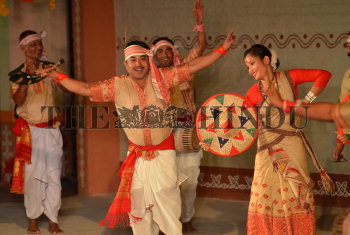 Caption : HYDERABAD, TELANGANA, 27/03/2015: Assamese dancers perform the Bihu, a folk dance, during the inauguration function of “Parv Purvottar” festival at Shilparamam in Hyderabad on Friday, March 27, 2015. The Bihu dance is associated with the spring festival of that name, widely celebrated in Assam.Young men and women perform the dance with brisk steps, rapid hand movements, and a rhythmic swaying of the hips to the accompaniment of the dhol (drum), taal (cymbals), mohar singar pepa (a pipe made from buffalo horn), gagana (a wind instrument made from reed and bamboo), and taka (bamboo clapper). The Bihu songs tell of youthful love and the pangs of separation. Photo: Nagara Gopal