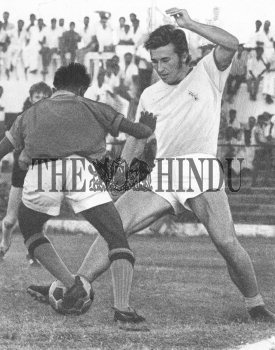 Caption : The ball is jammed between Padmanabhan of T.F.A. (back to the camera) and stopper Desiatnik of V.S.S. Kosice, Czechoslovakia who goes into an all-out tackle, in the exhibition football match at Nehru Stadium, Madras, on January 28, 1971. The Czech team won 3-1. (Pubd. in The Hindu on January 29, 1971) PHOTO: THE HINDU ARCHIVES