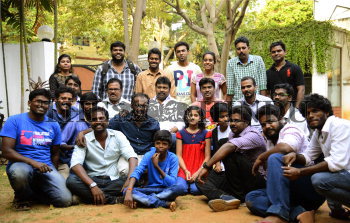 Caption : CHENNAI, TAMIL NADU, 26/03/2015: Director G. Bramma, Actor Ajay and Producer J. Satish Kumar along with other artistes of the movie 'Kutram Kadidhal', which won National award, during an interview with The Hindu, in Chennai on March 26, 2015. Photo: R. Ravindran