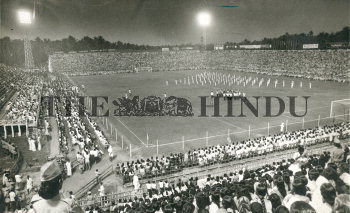 Caption : A panoramic view of the jampacked Municipal Stadium at Calicut witnessed during the opening day of the National Football Championship for the Santosh Trophy in Calicut. (Published in The Hindu on December 27, 1975) PHOTO: THE HINDU ARCHIVES