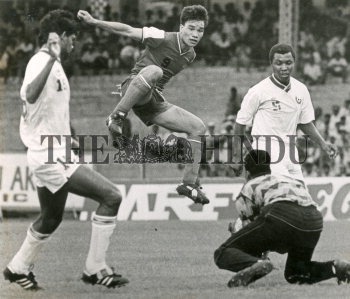 Caption : Kiran Khongsai of India leaps in the air to avoid the Omani goalkeeper Suleiman Khamis diving at his feet in the inaugural match of the pre-Olympic footbal tournament played at the Lal Bahadur Stadium in Hyderabad on August 04, 1991. (Pubd. in The Hindu on August 04, 1991) PHOTO: THE HINDU ARCHIVES