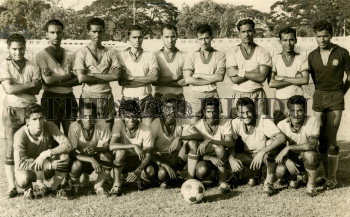 Caption : The Integral Coach Factory (ICF) team which retained the Madras Football Association senior division league championship beating former champion Wimco Sports Club by one goal to nil in the final match of the competition at Nehru Stadium in Madras on April 23, 1967. Standing sixth from left is Viswanathan, skipper of the team. (Published in The Hindu on April 25, 1967) PHOTO: THE HINDU ARCHIVES