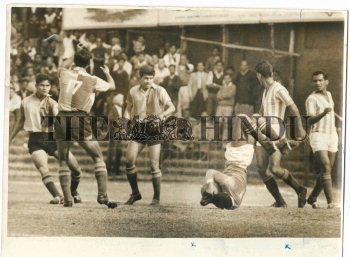 Caption : The Madras Regimental Centre, Wellington, goal-keeper Reddy rolls over with the ball and thwarts East Bengal's Dey's attempt in the quarter final of the Durand football tournament at Delhi on January 06, 1968. East Bengal won 2-1. (Published in The Hindu on January 08, 1968) PHOTO: THE HINDU ARCHIVES