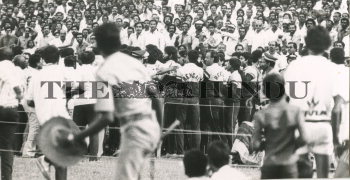 Caption : The agitated Bengal players arguing with police and the officials after the Karnataka-Bihar tie turned out to be a farce in the National Football Championship for Santosh Trophy at Quilon on April 17, 1988. The 6-0 win by Karnataka eliminated Bengal from the National championships. PHOTO: THE HINDU ARCHIVES