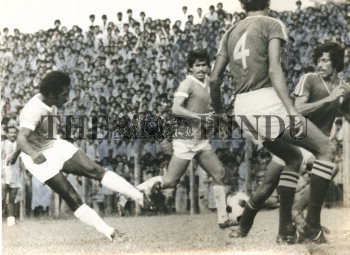 Caption : Fayazi's stinging shot is being blocked by Biplab Mazumdar of BNR during Kazma Vs BN Railway match of the IFA Shield Football Championship held in Calcutta. (Published in The Sportstar September 22, 1979). PHOTO: THE HINDU ARCHIVES