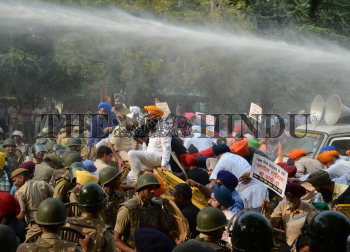 Caption : NEW DELHI, 26/03/2015: Police use water cannons to disperse Sikhs who were staging a protest outside CBI headquarters in New Delhi on March 26, 2014. They were agitated at the closure report filed by the CBI in a case against senior Congress leader Jagdish Tytler in connection with the 1984 anti-Sikh riots. Photo: V. Sudershan