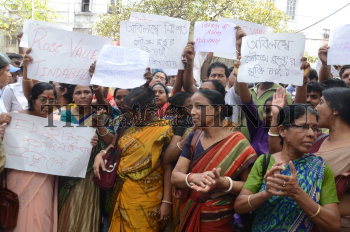 Caption : KOLKATA, WEST BENGAL, 26/03/2015: Employees of Rose Valley Group of companies protest outside the Court where in Kolkata on Gautam Kundu the group's owner was produced during the day. Mr Kundu was arrested on Wednesday by the Enforcement Directorate.The protestors also beat up several media personal and even damaged cameras. Photo: Sushanta Patronobish