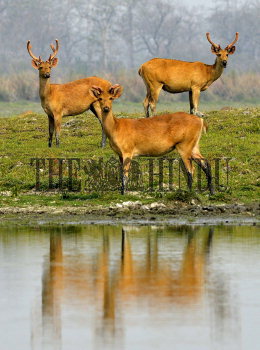 Caption : KAZIRANGA, ASSAM, 25/03/2015: A group of swamp deer curiously look at the forest officials (unseen) who are counting Rhino on elephant back during the first day of the Rhino census in Kaziranga National Park in Assam on March 25, 2015. Kaziranga is closed for tourist for two days Rhino census which is conducted every two years. Officials from the State forest department, forest guards battalions, NGOs and media groups take part. Photo: Ritu Raj Konwar