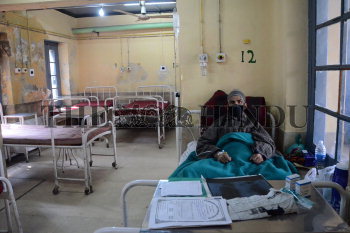 Caption : SRINAGAR, JAMMU AND KASHMIR, 24/03/2015: A Kashmiri Tuberculosis patient is treated at Kashmir's lone chest diseases hospital in Srinagar Tuesday on March 24, 2015. The hospital was established by Christian missionaries over a century ago, primarily for treatment of tuberculosis and other chest diseases. Tuberculosis is among the world's most infectious killers that affects more than 12 million people globally with 2 million deaths annually. India has three million people infected with TB and has an estimated 99,000 drug-resistant TB cases every year. A tiny fraction of those infected in India receive the proper drugs, even with a government-funded program. The World Health Organization has included India on the list of high-burdened countries that contribute to 80 percent of the world's TB problem. World TB Day is marked on March 24, 2015. Photo: Nissar Ahmad