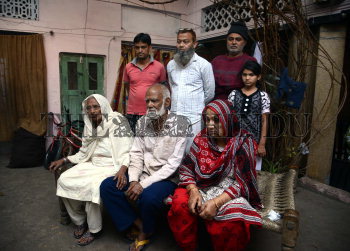 Caption : MEERUT, UTTAR PRADESH, 23/03/2015: Relatives of victims of Hashimpura massacre inside their home in Meerut, Uttar Pradesh on March 23, 2015. There is ominous silence in the lanes of Hashimpura, a Muslim mohalla on the outskirts of Meerut, where 42 residents were massacred 28 years ago. After a trial court in Delhi acquitted all 16 former personnel of the Uttar Pradesh Provincial Armed Constabulary (PAC), accused of the abduction and killing, there was anger and anguish among Hashimpura’s residents. Photo: S. Subramanium