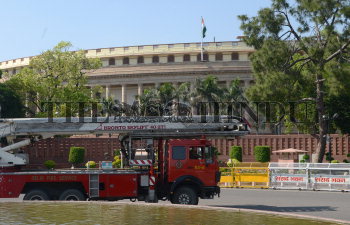 Caption : NEW DELHI, 22/03/2015: Delhi fire brigade vechicle coming out of Parliament premises after containing the fire at AC power plant in New Delhi on March 22, 2015. Fire was contained in half an hour with no casualties. Photo: Sandeep Saxena