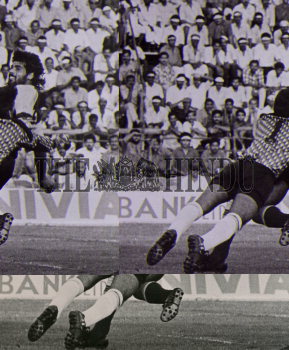 Caption : Maharashtra's goal keeper Yusuf Ansari rushing out to thwart a header by Bengal's Kuljit Singh in the second semifinal of the Santosh Trophy football championship at Kochi on February 28, 1993. Though Ansari was unable to prevent Kuljit Singh from getting the ball past him, luckily for the Maharashtra keeper the ball went out. (Published in The Hindu on March 01, 1993) PHOTO: THE HINDU ARCHIVES