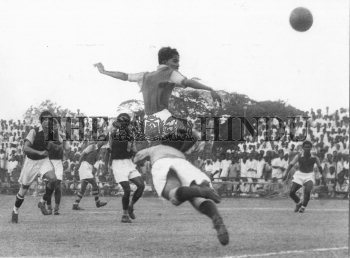 Caption : Delhi's goal-keeper Hardev, dives, but Janardhan (Madras) is a trifle quicker and puts the ball into the net after vaulting over Hardev. Delhi's goal-keeper, who is also the captain, played magnificently during the National football championship for Santosh trophy in Madras on July 26, 1954. Madras defeated Delhi by three goals to nil. (Published in Sport And Pastime on August 07, 1954) PHOTO: THE HINDU ARCHIVES