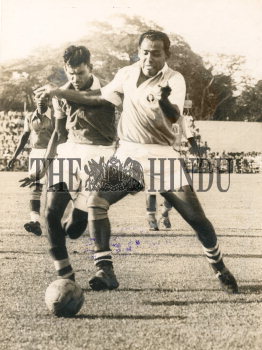 Caption : Anchineyulu (left), Madras full-back, and D'Classe, Travancore-Cochin's centre-forward, go for the ball. Though losing to a more experienced team, Travancore-Cochin put up a plucky display during the National Football Championship for the Santosh Trophy at Madras on July 24, 1954. (Published in Sport And Pastime on July 31, 1954) PHOTO: THE HINDU ARCHIVES