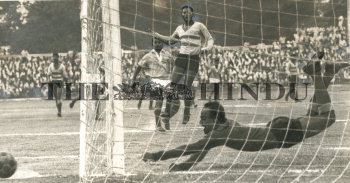 Caption : A.S.C. Centre goalkeeper Reddy has made an acrobatic dive to his left and turned the ball aside, after Southern Railway's Kamalesan (not in the picture) had sent a low drive in the first leg semi final of the T.F.A. Shield Football Championship in Madras on July 26, 1970. Railway's Ramdas (left) and A.S.C.'s Munda near the goal look on. Southern Railway won 2-1. (Published in The Hindu on July 27, 1970). PHOTO: THE HINDU ARCHIVES