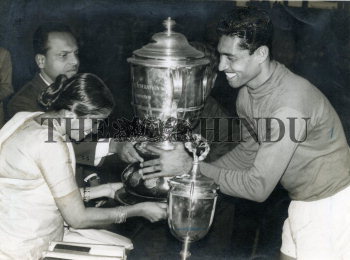 Caption : Though luck played its part in pushing both the Indian Railways and Services into the final of the National Football Championship at Hyderabad, Railways beat the Services in the replay of the final on February 05, 1967 by a good margin of two goals to nil to claim the Santosh trophy. Here Thangaraj, the Railways captain and a former skipper of the Services receiving the magnificent cup from Mrs. NAMBIAR, wife of A.K.K. NAMBIAR, I.G. of Police and President of the A.P. Football Association. (Pubd. in Sport and Pastime on February 25, 1967). PHOTO: THE HINDU ARCHIVES