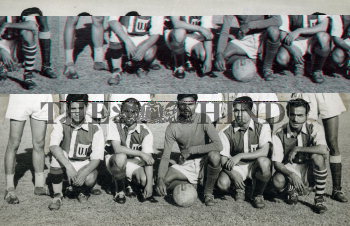 Caption : A group photograph of the Uttar Pradesh football team in the National Football Championship for the Santosh Trophy in Bangalore. Uttar Pradesh who showed plenty of energy and determination which, however, were of no avail against Kerala. They did not go beyond the first round. (Pubd. in Sport and Pastime on February 09, 1963). PHOTO: THE HINDU ARCHIVES