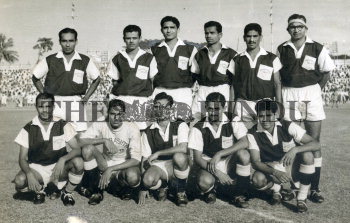 Caption : A group photograph of the Maharashtra football team in the National Football Championship for the Santosh Trophy in Bangalore. Maharashtra, former champions who fell in the semi-final before the ultimate champions by a lone goal in another absorbing contest. (Pubd. in Sport and Pastime on February 09, 1963). PHOTO: THE HINDU ARCHIVES