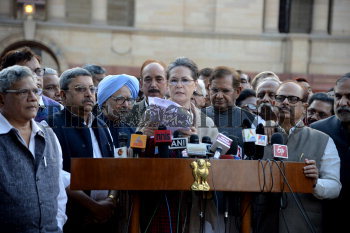 Caption : NEW DELHI, 17/03/2015: Congress President Sonia Gandhi with Former Prime Minister Manmohan Singh and other Opposition leaders addressing the media outside Rashtrapati Bhawan after meeting the President in New Delhi on March 17, 2015. The leaders marched from Parliament to Rashtrapati Bhawan in a show of strength and solidarity against the controversial Land Acquisition Bill. Photo: S. Subramanium