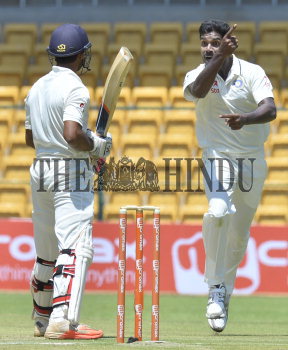 Caption : Karnataka, Bengaluru, 17/03/2015: Rest of India bowler VARUN Aaron, celebrates after taking the wicket of Mayank Agarwal of Karnataka during the Irani Trophy cricket match between Rest of India and Karnataka at Chinnaswamy stadiurm in Bengaluru on March 17, 2015. Photo: K. Bhagya Prakash