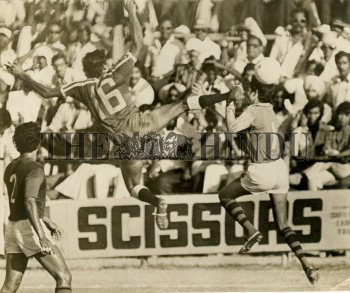 Caption : The Railway striker Bakul Das (16) has jumped high and sent a flying kick (the ball is the object and not the men) and a leaping Mohun Bagan goalkeeper Shibaji Banerjee has not been able to intercept the ball. But no damage to the Bagan goal results in the quarter-final league of the Federation Cup Football tournament at Madras on April 28, 1981. Mohun Bagan won 2-0. PHOTO: THE HINDU ARCHIVES