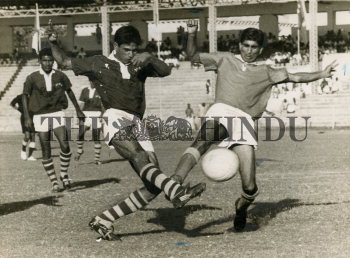 Caption : Andhra Pradesh's inside-right Ishaq scoring the first goal for his side against Gujarat during their National Football Championship for Santosh Trophy match at Hyderabad on January 18, 1967. (Published in the Sport And Pastime on January 28, 1967). PHOTO: THE HINDU ARCHIVES