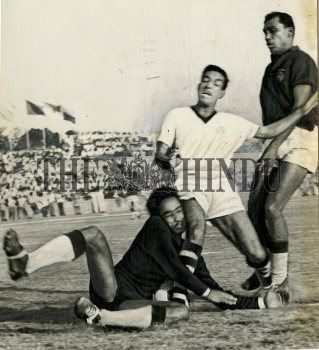 Caption : Bengal's goal-keeper, Bolai Dey, grabs the ball from Maharashtra's forward Rawat as defender Prasad attempts to trap the ball in the second-leg SEMI-final of the National Football Championship for the Santosh Trophy at Bangalore on March 25, 1969. The match ended in a 1-1 draw which brought the teams tally to three goals each from two matches. Bengal qualified for the final after the draw of lots. PHOTO: THE HINDU ARCHIVES