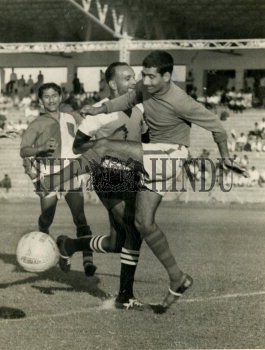 Caption : Khalik, goal-keeper of the Jammu and Kashmir rushes out and clears the ball before a Maharashtra forward could take the shot at the goal in the National Football Championship for Santosh Trophy match at Hyderabad on January 19, 1967. Maharashtra won 6-0. (Published in The Hindu on January 21, 1967). PHOTO: THE HINDU ARCHIVES