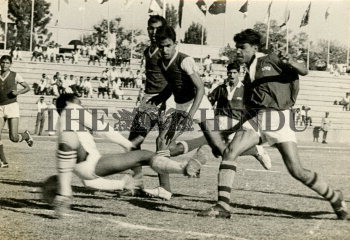 Caption : Orissa goalkeeper Bharati Misra dives in vain, as the ball rolls under him (the ball is near the right leg) into the goal off a shot from Andhra Pradesh's Chakravarthy (right) as the defenders look on anxiously in the National Football Championship for Santosh Trophy match in Bangalore on February 28, 1969. PHOTO: THE HINDU ARCHIVES