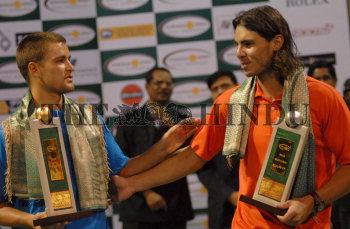 Caption : CHENNAI, 06/01/2008: Mikhail Youzhny of Russia, who won the final, having a word with the runner up Rafael Nadal of Spain after receiving the trophy at the Chennai Open ATP tournament at the Nungambakkam Stadium in Chennai on January 06, 2008. Photo: M. Vedhan