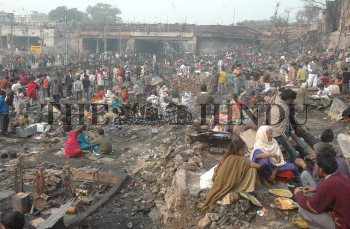 Caption : NEW DELHI, 06/01/2008: A devasting scene after seven people where killed in a fire in which 250 jhuggis were gutted in a fire in the early hours on January 06, 2008 at Lahori Gate in Delhi. Photo: Sushil Kumar Verma