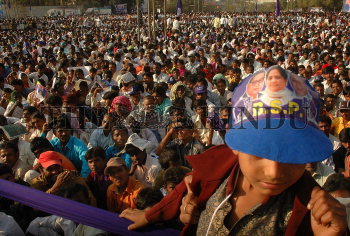 Caption : HYDERABAD, 06/01/2008: A view of the of Backward Classes and other lower castes mass congregation held at Nizam College Grounds in Hyderabad on January 06, 2008 which was addressed by Bahujan Samaj Party National president and Uttar Pradesh Chief Minister Mayawati. BSP is trying to make a foothold in the State by supporting Telangana issue. Photo: Mohammed Yousuf