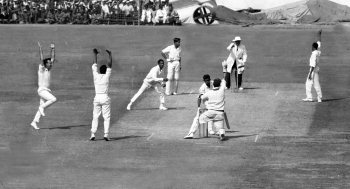 Caption : West Indian wicket-keeper J.L. Hendricks (who took the catch), the bowler L.R. Gibbs and other fielders appeal successfully for a catch against Indian batsman V. Subramanyam during the second cricket Test match at the Eden Gardens in Calcutta on January 04, 1967. PHOTO: THE HINDU ARCHIVES