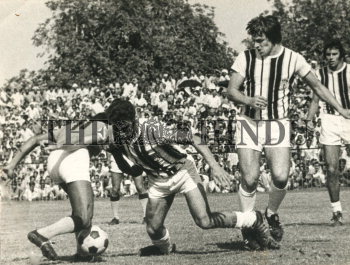 Caption : The Bayerischer Club's stopperback Zieglmeier and the BSF forward Nandkishore attempting to get possession of the ball near the German goal in the DCM football tournament at New Delhi on October 18, 1972. Two other defenders of the Munich team watch anxiously. The visitors won 3-2 and entered the semi-final. (Pubd. in The Hindu on October 20, 1972) PHOTO: THE HINDU ARCHIVES