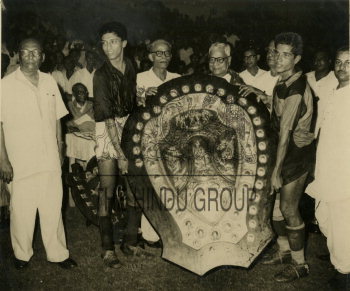 Caption : The two captains, Goswami of Mohun Bagan (second from left) and C. Chanda of East Bengal (second from right) hold the IFA Shield. B. MAJUMDAR, Minister for Commerce and Industry, West Bengal, is seen at the centre. Calcutta's two leading football teams could not establish decisive superiority over the other in the IFA tournament. (Published in Sport and Pastime on October 14, 1961) PHOTO: THE HINDU ARCHIVES