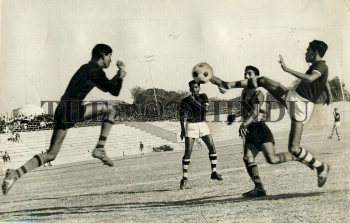 Caption : Victor of Madras, who scored three goals in a row of the four notched by his team against Rajasthan in the quarter-final of the National Football Championship for Santosh Trophy played at the Kanteerava Stadium in Bangalore on March 10, 1969, lobs the ball over the onrushing RATHI, Rajasthan goal-keeper. Madras won 4-1. PHOTO: THE HINDU ARCHIVES