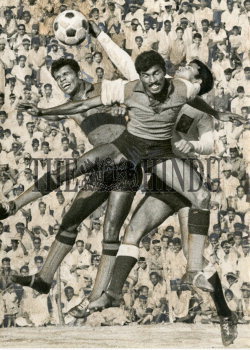 Caption : Kanaran (left) and Sankaran Kutty (middle) both of Services go up in the air, to score off a flag-kick, but Bengal goal-keeper Sarkar, who is also off the ground, manages to pat the ball away in the Bengal Vs Services quarter final match of the National Football Championship for Santosh Trophy held at Nehru Stadium in Madras on April 25, 1971. Bengal won 1-0. (Published in The Hindu on April 26, 1971). PHOTO: THE HINDU ARCHIVES