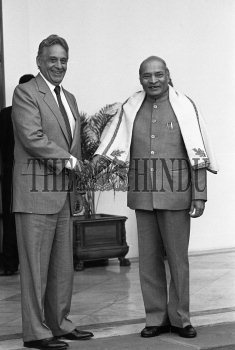 Caption : President of the Federal Republic of Brazil Fernando Henrique Cardoso with Prime Minister P.V. Narasimha Rao before a delegation level talks and signing a bilateral AGREEMENTS between the two countries followed by a join press conference, in New Delhi on January 27, 1996. PHOTO: THE HINDU ARCHIVES