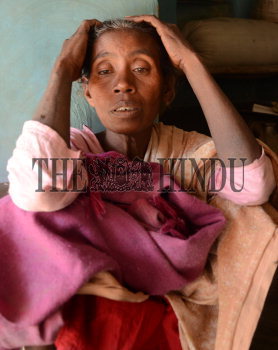 Caption : KOLKATA, WEST BENGAL, 11/03/2015: Kalamani Murmu wife of Guddu Murmu, a farmer who committed suicide early this week at her home in the State's bardhaman district. Despite a good yield of POTATOES this year there were takers for the produce which forced the farmer to commit suicide, the family alleged. Photo: Sushanta Patronobish