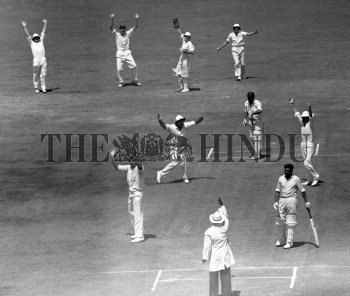 Caption : New Zealand wicket-keeper J.T. Ward (who took the catch), the bowler R.C. Motz and team members successfully appeal for the catch against Indian batsman D.N. Sardesai on the second day of the third cricket test match at the Brabourne Stadium in Bombay on March 13, 1965. PHOTO: THE HINDU ARCHIVES