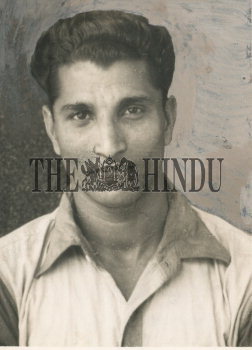 Caption : Photo shows THOMAS Varghese (Services), an experienced footballer, having played in the National Championship. Twenty-eight-year-old THOMAS Varghese studied in Thiruvalla S.C.S. English High School in Travancore. After leaving school, he joined Signals in 1946 and played regularly for his units in tournaments. (Published in Sport and Pastime on July 10, 1954) PHOTO: THE HINDU ARCHIVES