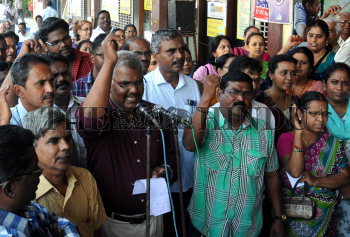 Caption : CHENNAI, TAMIL NADU, 09/03/2015: All India Insurance Employees Association (AIIEA) called on the LIC employees to go on strike on March 09, 2015, protesting against the passing of the Insurance Amendment Act in the Lok Sabha, increasing the FDI from 26% to 49%. The Insurance employees have been strongly opposing the bill and had warned the Government that they will go on strike if the bill is passed. LIC employees at Anna Salai in Chennai staged protest stating their demands on March 09, 2015. Photo: B. Jothi Ramalingam