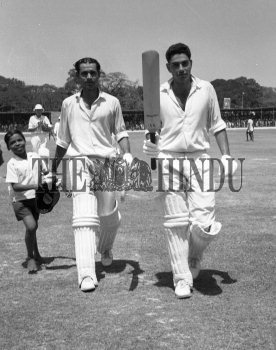 Caption : Indian batsmen R.G. Nadkarni and F.M. Engineer, who involved in a record stand of 143 runs for the eighth wicket, snapped while returning to the pavilion during the second day of the first cricket Test match against New Zealand at the Nehru Stadium in Madras on February 28, 1965. PHOTO: THE HINDU ARCHIVES