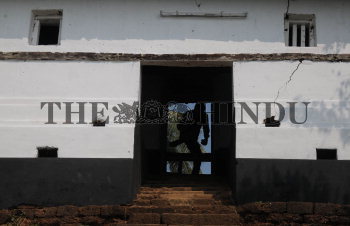 Caption : PALAKKAD, KERALA, 03/03/2015: Vanishing tradition- A Padippura that excels the passage of time at Shoranur on the banks of the Bharathapuzha River. Once the Padippuras, a building structure at the entrance which leads to a residential complex, were a part of the agrarian culture of the state. But many such a construction is facing destruction owing to the dearth of proper conservation. Though many among the new generation have constructed the replica of the padippura to embellish their concrete jungles, the new ones have lost the grandeur and nobility of the old one. Many films were shot in the backdrop of this Padippura, the earliest among them being the late A.Vincent’s `Murapennu’ Popular films like Mohanlal’s `Narasimham’ Aranthampuran was also shot at this LOCALE. Photo: K. K. Mustafah