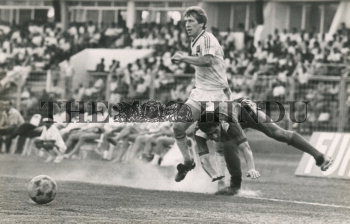 Caption : Sharar Hayder of Iraq loses his balance while Russia's Piatnitski tries to block him in the Nehru Gold Cup Football tourney match at Margao on January 21, 1989. (Published in The HIndu on January 22, 1989). PHOTO: THE HINDU ARCHIVES